Home Apple Will Any Browser Truly Challenge Safari On iOS

Browsers are one of the most essential tools on our computers. They facilitate our interaction with the rest of the world through the internet. They are the glasses through which we see the online world, and the fight for control of those glasses has continued since the beginning of the internet. Developers have realized that being able to manipulate our experience of the world wide web is a very valuable thing, and they’ve rushed to fill that role. 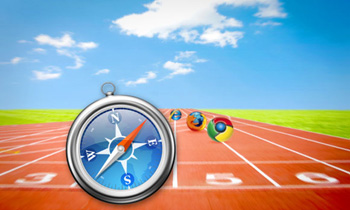 The History of Browsers

The history of the browser wars is a storied one. It all started one fateful night with the advent of Netscape Navigator, a web browser developed by Netscape. It was pretty simple, but so was everything back in those days. Microsoft didn’t like Netscape’s position and saw an opening. Since most computers ran Windows, Microsoft was able to ship their browser, Internet Explorer, with their operating system. This way, new computer owners would start out with their browser. This gave Microsoft a huge advantage and led to their eventual dominance. Since then, many other browsers have risen and fallen, including Mozilla Firefox and Google Chrome.

On Apple’s operating system, iOS, the story is quite different. Safari, Apple’s browser has dominated it since its inception. They have done with Safari what Microsoft did with Internet Explorer. The only difference is that IE eventually vanished from its spot on top. However, IE was also notorious for being slow and especially susceptible to security threats. Its poor performance likely lead to its collapse. Safari, on the other hand, isn’t known for such issues, so perhaps iOS users never felt the need to download anything else. Maybe we are looking at what IE could have been if it was executed better.

Safari’s grip on iOS has been powerful, but will it truly last forever? History is full of examples of browsers rising to near-monopoly status and falling from grace. Many think Safari is just experiencing its peak of popularity but will surely collapse like all the others. Maybe it will follow that path, or maybe it will defy history. Perhaps, though, it will be the only browser to monopolize an entire operating system.

The ones who really know how to build a website—industry developers—are hoping that this isn’t true. In fact, they’re betting on it. Reportedly, Mozilla, the masterminds behind Firefox, is working on a browser for the iPad. This is an interesting project not just because of the aim of displacing Safari but also because of the focus on a mobile device. Having a powerhouse like Mozilla behind this means it has some promise, but even if it takes control of the iPad, the iOS system at large will still be untouched.

The problem for other developers lies in the difficulty their browsers experience on iOS. Even Chrome, which has quite the advantage over IE on Windows, runs very slowly on Apple’s operating system. They’re known for their speed on Windows, but they have a hard time achieving that on iOS. In fact, it is so hard to work with that Mozilla reportedly banned iOS for Firefox.

Safari has been somewhat of an anomaly in the history of browsers. It’s kept a firm hold of the top spot for an operating system longer than any other browser ever has. Will one of it’s new or old competitors knock it off its pedestal? Will it ever be displaced from its monopoly on iOS? It’s safe to say that the deck is stacked against competitors and in favor of Safari. It doesn’t look like any true challenger is out there yet, but maybe one will pop up in the future. However, they’ll have quite the uphill climb.