Home Gadgets Why Some People Stick To Their “stupid” Phones

Smartphones have become the most preferred telecom tool globally owing to its practicality. Either for work or personal use, all its advanced features and functionality make it a must-have for many millennial who also find it necessary to go online all the time. Smartphones of any tech platform also offer people the capability to access the web even in a mobile situation. The need to be informed in real-time and to have the capability to refer to an always-on IT infra such as that offered by smartphones functioning as pocket PCs are two of the most compelling reasons why smartphones rule. 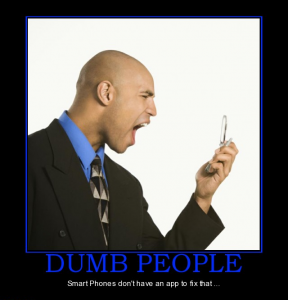 Not everybody however, subscribes to this predominant belief. There are still strong holdouts out there that have their reasons for being so. The average smartphone user might find it hard to believe or even unthinkable that there could still be those who prefer to stick to their “stupid” mobile phones. The validity of any argument that raises the question about why some people prefer to stick to their stupid phones could only be justified by the inability to take some factors into proper consideration, especially the technical side of the argument.

The lowly stupid phone might not have all the advanced features or functionalities that smartphones have in terms of the apps that the latter could carry and the web access open to it. The smartphones ability to be used as an online meeting tool practical for videoconferencing or online collaborative work may not also be found on any typical mobile phone. People must remember however that in any mobile situation such matters as durability, battery power and wifi availability are vital factors to consider.

Stupid phones might be inferior to smartphones with regards to features but definitely, they happen to be more durable (try dropping a smartphone), have longer lasting battery lives (the perennial smartphone complaint), and have no real use for wifi access as a basic telecom tool. In fact, a laptop could handily do what any smartphone could when it comes to web access. Any stupid phone user with access to a hosted VoIP PBX could be just as efficient as any other telecommuter using a smartphone. In other words, the smartphone has yet to evolve into a mobile device that’s durable and with a longer battery life.

The user not the Phone

People have their reasons for technology the same way that technology is innovated by people to fulfill certain objectives that are worthwhile and justifiable. Regardless if you are a smartphone or stupid phone user, what truly matters is that you have the ability to commandeer technology to accomplish vital objectives and tasks responsibly. It is not the phone you use but how well you use it. Smartphone use might be prevalent but it could never truly work for everyone just yet and these are the biggest reasons why:

Some people just have no real and practical use or the many features and functionality that smartphones offer. Mobile workers who are more prone to make calls or send text messages, for example, do not really have the time or the patience to do other things with their phones other than that. There are people who might want to use web access and do paperwork at the same time but could find themselves cramped doing these tasks via their smartphones. Sometimes too much tech is too much tech wasted for other people.

Smartphones are more expensive than stupid phones. Why buy one when you could still do the same things you need to do without having to worry about battery life and breaking your phone if you accidentally drop it?

Some people tend to be intimidated by new tech. However, this usually proves to be a temporary hindrance. Intuitive and user-friendly interfaces are the norm and even the least tech savvy could be smartphone capable in no time at all.