Before olx india came across the horizon, the classifieds industry in India was restricted to the expensive and obsolete method of printing your ads in newspapers and magazines. Especially when it came to homeowners and small time business owners, print classifieds were expensive deals and the response was a big concern. However, OLX.in has changed the way people post advertisements, as this online classified site doesn’t just make advertising free, but offers far better response rates. Fascinatingly, OLX has revealed its core benefits through its own TV campaign that brings home the core message.

The ordinary people are increasingly embracing the benefits of this free online classifieds platform, posting ads of almost everything that they have to offer or of things and services that they need. OLX.in makes it simple for just anyone to post their ads under a number of categories that cover almost everything. The site lists categories of Mobile Phones, Home & Lifestyle, Electronics & Technology, Vehicles, Real Estate and Jobs & Services. In simple terms, whether you have a product or service to sell, or if you are looking for a product or service, just post the ad on OLX for free.

Most notably, the ads can be locally targeted in specific cities or states as per your need and convenience.

The TV ad campaign of OLX.in has gone viral and everything ranging from the youth to the old are beginning to connect with the message and the brand. The element that lies at the core of OLX’s success as the online classifieds platform is simple – ‘Convenience’. A homeowner that seeks to turn some old item into cash can easily achieve this by selling it on this site with just a few clicks. 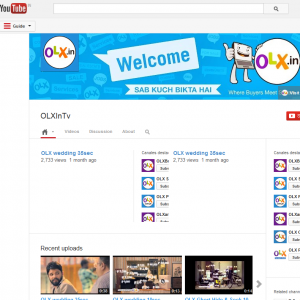 With the tagline, “Sab Kuch Bikta Hai” OLX is breaking into new boundaries by taking the internet revolution into the living room of every home in India. The fascinating and at times humorous video ad campaign of OLX certainly leaves a strong impression on the minds of the viewers. Whether it is the wedding, whether the home is filled with unwanted stuff that is taking up all the space, whether it is that old scooter or car or PC that is the perfect example of “old is gold”, or whether it is the treadmill that you bought years ago but keeps catching dust in the corner, OLX.in empowers you to en-cash almost everything.

Whether it is about the website OLX.in or their Stay connected video campaign, simplicity is what defines this site in the best possible way. The online classified site follows the age-old successful online mantra of KISS (Keep It Simple, Stupid). The site is as clutter-less as possible with just the list of the categories and subcategories and the states and cities where you need to search or post your ad. A couple videos, part of their ad campaign, are also added without any heavy flash messages.

Trendy and with a touch of wit, the TV ad campaign of OLX is not just about promotion but it is also entertaining. In other words, it is a campaign with a difference that keeps viewers guessing what they are going to advertise next.